The Titans traveled North on Saturday morning, September 18th to Warren Township High School for the Bill Dawson Blue Devil Invite. The team spent the prior week preparing for the fast course followed by short rest with the CSL schedule starting on Tuesday. The course offered PRs on all levels as the boys worked specifically on packing up more and not trying to win the race in the first 400 meters.

The Frosh/Soph race started the day off with the last 3-mile race of the season for the freshmen. Sophomore Cyrus Cooke led the way for the Titans in 17:39 for 13th place. He was followed soon after by sophomores Sam Knezevich (18:32) and Charles Sturiale (18:35) in 35th and 36th respectively. Cole Branstrom finished first out of the freshmen with a time of 19:10 for 53rd place. Finishing off the scoring runners for the team was Jan Jedynak (19:40, SO) with Luke Chavez (19:41, SO) right behind him. Overall, the team finished 8th at this level.

Varsity was up next with sophomore Andy Ordway getting his first race at this level. Senior Brian Hiltebrand stuck with the front group through the first mile and beat out a runner from Evanston at the line to get 6th place with a time of 15:46. Senior Jayson Stamm finished soon after at 16:02 in 12th place. Senior Elie Nassif ran a great race, finishing in 16:32 for 20th place, and Michael Westfall (17:01, SR) and Michael Jerva (17:06, SR) rounded out the varsity scoring to get a 3rd place finish only 1 point behind Evanston who the team will have the chance to get revenge against on Tuesday. Also, Andy Ordway got a nice PR of 17:12 in his first Varsity race!

It was another great day of racing for the Titans, and the team made some huge strides on all levels. The boys have a quick turnaround upcoming as they travel to Evanston Township High School on Tuesday for a CSL Quad Meet against Evanston, New Trier, and Niles West. Congrats to all runners who PRed at Warren, and we will see you all back on Tuesday! 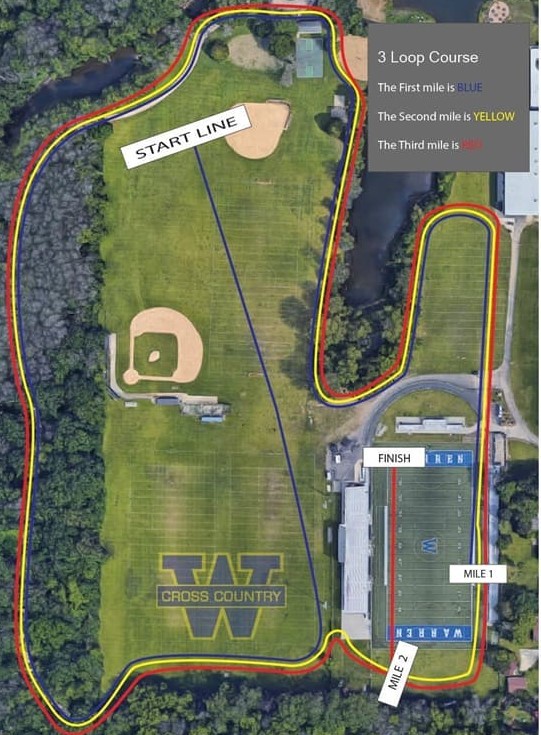