As the Titans arrived at Evanston Township High School on Friday, June 4th, they knew the conference title wouldn't come easily. The week's warm weather seemed to reach its peak that afternoon, with the temperature climbing to 91 degrees in the bright sun. Going into the meet, the Titans hadn't won a CSL Conference Championship since 1987 – a 34-year drought. Everyone knew it was time to change that.

At 2:00 pm, field events started strong, with captain Ryan Faut (SR) easily winning the shot put with a throw of 17.08m. A PR, this throw was nearly 4m ahead of the runner-up, and it earned him a number 2 spot on the Glenbrook South all-time shot put list. Behind him was Thomas McDonnell (SR), who threw a distance of 13.04m to take 3rd.

With a strong start from the throwers, the meet moved onto the long jump. It was a breakout day for Ryan Schaefer (SO), who jumped 6.61m to PR by an enormous margin. This jump crowned him conference champion, and it also broke the sophomore school record with a GBS #6 all-time performance. Behind him was Nathan Shapiro (JR), who, even with an injured ankle, managed to take 6th at 6.07m.

The high jump was exciting to watch as Noah Shapiro (JR) and Evanston's Matt Cless battled back and forth, slowly moving the bar up inch by inch. In the end, Cless prevailed at a height of 1.92m to Shapiro's 1.87m. Behind them, captain Artie Schleizer (SR) took 5th at 1.77m.

In the discus, Ryan Faut again dominated with a throw of 51.10m. This throw was over 11m ahead of the 2nd place finisher. In 3rd was Thomas McDonnell, with a throw of 37.45m. As the discus wrapped up, the Titans began the track events with a sizeable point lead.

In the 4x100m relay, the team of Ben Freidinger (SO), captain George Dornan (SR), Nathan Shapiro, and Noah Shapiro finished just behind Niles West to take 2nd. Their time of 43.75 was a quarter second behind Niles West's 43.50.

Next up was the 3200m run, where captain Cody Slutzky (SR) and Jayson Stamm (JR) represented the distance team. From the start of the race, New Trier's Charlie Siebert and Maine South's Matt Coyle dominated the race, finishing 1st and 2nd in 9:36 and 9:44 respectively. Behind them, Slutzky and Stamm stuck together as they battled it out with runners from New Trier and Evanston. In the end, the pair finished in 3rd and 5th respectively, running times of 10:21.72 and 10:28.93.

The 3200 was followed by the 110m High Hurdles. This race featured Evanston's Kalil Johnson, the state's top hurdler. Johnson's time of 14.30 was a full second and a half faster than the 2nd place finisher. In 5th was Glenbrook South's Tyler Hurst (SR), who ran a time of 16.73 seconds.

In the 100m dash, Noah Shapiro dominated with a time of 11.05 seconds. This massive PR puts him just .05 seconds over the IHSA state qualifying time. This was also a GBS #7 all-time performance.

Next was the 4x200m relay, consisting of Noah Collins, Artie Schleizer, Ben Freidinger, and Tyler Hurst. The team finished in 4th place, behind New Trier, Nile West, and Evanston.

Finishing much later than expected, the triple jump was a success for South's Stefan West, who jumped a PR of 13.27m to win the event. This was a GBS #4 all-time performance. Behind him was Ben Freidinger (SO), who finished in 7th with a jump of 12.20m.

The 300m hurdles were up next, and Ryan Schaefer ran phenomenally to finish in 2nd place with a time of 41.39 seconds. Tyler Hurst also ran a great race, finishing in 5th with a PR of 43.69.

The final individual event of the afternoon was the 200m dash, where Noah Shapiro took 3rd in 22.24. This PR was a #4 all-time performance for GBS, and it surpassed the IHSA state-qualifying standard.

With the individual events finished, Glenbrook South held only a two-point lead over Evanston going into the 4x400m relay; the conference title would come down to the final event. Ryan Schaefer led off the relay, holding the Titans in 3rd through the first leg as he split a 52.1. Schafer handed the baton off the Artie Schleizer. This was Artie's first 400m in over two years, but he stepped up to fill in for an injured teammate. Artie held onto the 3rd place spot, splitting a 56.0 before handing the baton to Brian Hiltebrand. With a widening gap forming behind Niles West and Evanston, Brian battled back, making up a huge amount of time and splitting a 52.1 before handing the baton to George Dornan. Still in 3rd, Dornan was nearly 3 seconds behind Evanston, who was in 1st. After passing Niles West with 250m to go, Dornan chased down Evanston's final runner, passing him in the final 100m. George's split of 50.4 solidified the win for the Titans. In the end, this race clinched the victory for the team. To watch the race, see here.

This past Friday was a great day to be a Titan. Despite the heat, the injuries, and all the pressure surrounding the meet, every single person who competed did what they needed to do to contribute to the team. Thank you to everyone who showed up to support us. Parents, alumni, and fans all helped push the team towards a victory. We can't wait to let this momentum carry us through to this Thursday's IHSA sectional at Glenbrook South. 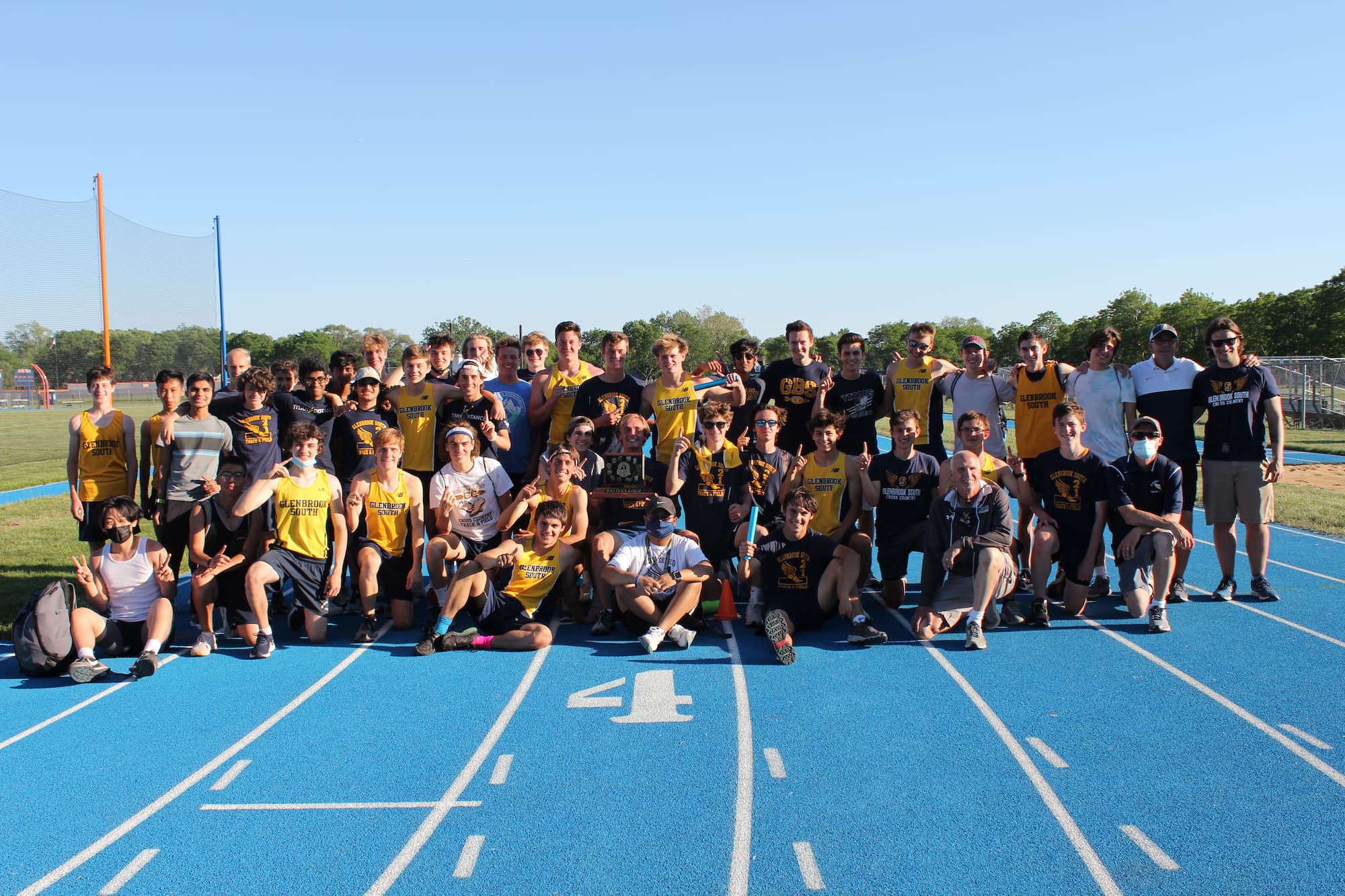