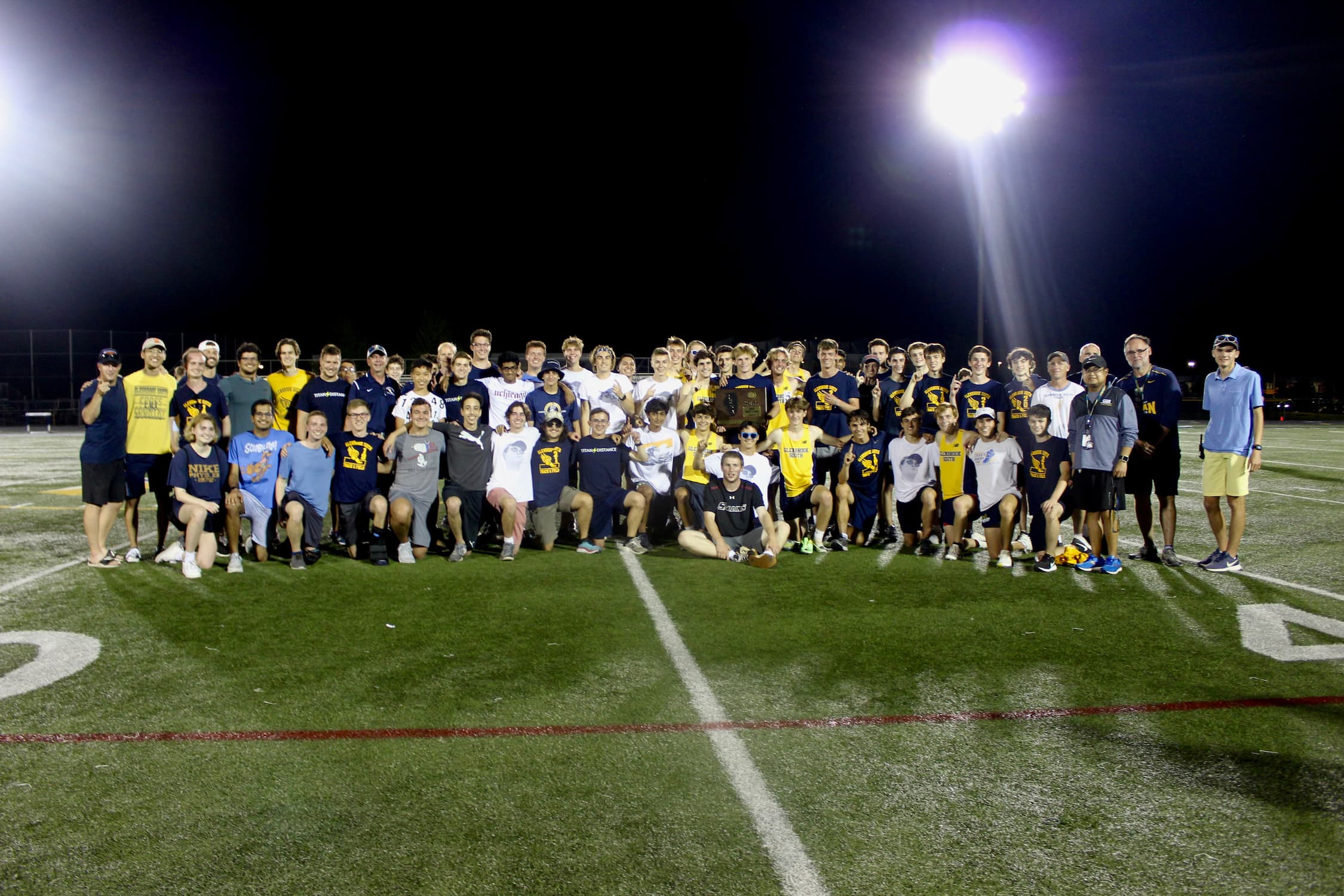 Sectional magic was in the air on Thursday afternoon as the Titans competed against 15 other teams to qualify for state. Never in program history had the team won the meet, but our exceptional group fought hard and brought home the sectional plaque. In the end, Glenbrook South's score of 101 bested Loyola Academy who finished in 2nd with 74 points. In addition to this fantastic team effort, 5 Titans qualified for the IHSA state meet across 8 different events. Congratulations to Nathan Shapiro, Noah Shapiro, Ryan Faut, Stefan West, and Brian Hiltebrand for this huge accomplishment.

At 4:00 PM, the field events started with the long jump. In 4th place was Ryan Schaefer (SO), who jumped just short of the state qualifying standard at 6.58m. Ahead of him was Nathan Shapiro (JR), who took 3rd at 6.81m, qualifying for the state meet. Nathan previously qualified for state as a freshman in the 300m hurdles.

As the long jump went on, Noah Shapiro (JR) and captain Artie Schleizer (SR) competed in the high jump. Schleizer took 5th, jumping a height of 5'11". Noah followed that with a personal best, jumping 6'3" to take 3rd and qualify for state.

Out at the discus ring, captain Ryan Faut (SR) dominated the event with a throw of 49.30m. This throw won him the meet by nearly 5m as he qualified for state. Behind him was Tom McDonnell (SR), who threw 36.69m to take 7th.

In the pole vault, Elie Nassif (JR) finished in 6th, vaulting a height of 3.41. Patrick Moran (SO) was a no-height.

Rounding out the jumps, Stefan West (SR) and Ben Freidinger (JR) competed in the triple jump. Finishing in 17th, Freidinger jumped 11.73m. West's jump of 13.19m earned him a 2nd place finish and a trip down to the state meet.

In the shot put, Ryan Faut again dominated with a throw of 16.86m, handily winning the sectional by over 2m. Thomas McDonnell finished in 10th at 13.00m.

In the 4x100m relay, the team of Ben Freidinger, captain George Dornan (SR), Nathan Shapiro, and Noah Shapiro narrowly missed qualifying with their 3rd place finish. Their time of 43.13 put them just 0.06 seconds behind Prospect.

In true Shapiro fashion, Noah and Nathan raced hard in the 100m dash. The pair finished in 3rd and 4th respectively, running near identical times of 11.24 and 11.26. Both narrowly missed qualifying in the event.

Brian Hiltebrand (JR) and Michael Jerva (JR) both had something to prove in the 800m, running their hearts out in a fantastic race. Running neck and neck with New Trier's Patrick Jamieson, Hiltebrand finished in 2nd at 1:57.75. This was the exact qualifying time for the event, and it earned Brian a trip down to the state meet. Jerva finished in 6th with a time of 2:01.74.

In the 4x200m relay, the Titans ran a time of 1:36.45 for a 6th place finish. The team consisted of Noah Collins (JR), Austin Hurst (SO), Artie Schleizer, and Ben Freidinger.

Up next was the 300m hurdles. Due to an injury, Nathan Shapiro hadn't run the event since the Conant Invitational, but he was striving to repeat his freshman year qualification. His time of 39.21, a PR, put him in 2nd place, just behind the top hurdler in the state, Kalil Johnson of Evanston. This was the second event Nathan qualified in at the meet. Behind them, Ryan Schaefer took 6th with a time of 41.51.

The final individual event of the evening was the 200m dash. Running just 0.02 seconds behind the first place qualifier, Noah Shapiro finished in 2nd, qualifying for state with a time of 22.68. Ben Freidinger ran a PR of 23.65 to take 13th.

To close out the night, the 4x400m relay began right at 9:00 PM. The team of Ryan Schaefer, Michael Jerva, Brian Hiltebrand, and George Dornan was intent on taking 2nd to qualify for state. Though the team ran hard, they fell just short, finishing in 3rd by 0.73 seconds. The two qualifying teams were Loyola Academy and Prospect. Though it wasn't the outcome the boys wanted, they competed fantastically and have every reason to be proud of their performance.